Inclusivity Defeats Terrorism in “Come From Away” 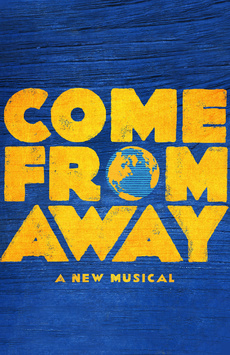 Continuing the Broadway weekend activity tradition, members of the Peddie community embarked on a trip to New York City to see the musical Come From Away at the Gerald Schoenfeld Theatre on January 6, 2018. The show features twelve company members, each portraying multiple recurring characters dealing with the aftermath of the September 11, 2001 attacks in the United States.

Peddie viewers who attended reacted with great positivity to the two-hour musical and appreciated the artistic aspects of the show. “The simplicity of the set made it easier to empathize with the characters. The music was great, the cast was very multitalented, and there was plenty of comic relief to lighten the mood,” said Uma Mani ’20.

Come From Away opens with the members of Gander, Newfoundland, Canada, learning of the terrorist attacks in New York City and Washington D.C. Due to the 9/11 attacks, the U.S. airspace is closed, and every airplane is treated as a possible bomb threat. 38 aircrafts are forced to have an emergency landing in Gander as a result. The townspeople of Gander immediately prepare to house, feed, and care for thousands of passengers and even a few animals. Meanwhile, flight passengers that come from all around the world are stranded inside the aircrafts, unaware of the terrorist attacks and cut off from the world. After disembarking the planes, the passengers and flight crew learn of the 9/11 events. Fear and anxiety rises as each is affected by the attacks and many attempt to phone home. In order to mitigate the situation, the Newfoundland natives help the passengers assimilate into their town, showing care and inclusivity for all regardless of race, sex, nationality, and sexual orientation.

“The story of a small town’s act of solidarity is one I will never forget,” said Evan Glas ’20. In the midst of a tragic event, the show was able to portray the unlikely friendships of the townsfolk of Gander with people all around the world. The empathy and kindness of characters within the play help to comfort the various losses of other characters on 9/11. As the airspace re-opens, the passengers assert that even though they all “come from away,” they have found a lasting connection. Thus, they unanimously express that it is imperative to help strengthen the global community.

Come From Away also registers the internal struggle with prejudice as a result of modern terrorism. “The show depicted the initial racism against a Muslim character, which demonstrated the effect 9/11 had on the American psyche,” said Mani ’20. The man begins to face doubt and bias from his fellow passengers when he is heard speaking Arabic on the phone. However, the people of Gander and the passengers slowly accept him, and he is able to experience the inclusivity and hospitality of the townspeople. On the other hand, he sings about his daughter’s troubles with racism at school and goes through a humiliating and invasive search prior to re-boarding the plane. Through the show’s efforts to promote a message against prejudice, it recognizes the struggle of a population of Americans, an issue still present today.

Overall, the musical provided pleasant entertainment and highlighted camaraderie in times of distress. “The show was simply amazing. It was informative to learn different perspectives of 9/11 while still enjoying the music and acting,” said Ellen Yan ’20.