Art of Sarah Sutton—A Combination of Philosophy and Film 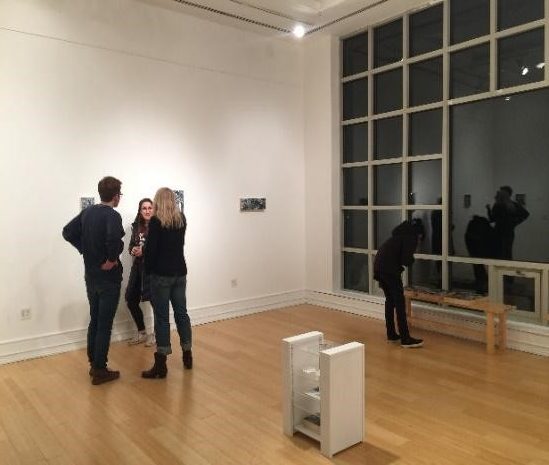 The Peddie Arts Department introduced students to the work of guest artist Sarah Sutton on January seventeenth. Sutton gave the Peddie community insight into her work by answering questions from Honors Studio Art students Lilia Jimenez ’18, Elaine Moon ’18 and Nicholas Berlet ’18. At the end of the student-led panel, those in attendance were able to ask questions and understand Sutton’s artistic choices, procedures, techniques, and budding ideas for the future.

Even though Sutton discovered her passion for art at a young age, her parents encouraged her to pursue a career in law, instead, due to her outstanding academic performance at school. In preparation for this, Sutton initially majored in Philosophy, but ultimately moved to California to study film. Yet film felt too detached from Sutton’s body, leading her to choose an artistic medium she described as “slower” and one that enabled her to use her hands. Although neither philosophy nor film become the ultimate career paths for the artist, Sutton credited both in the development of her current approach to art. A former undergraduate advisor of Sutton’s once described Sutton’s art work as “philosophical statements.” While reflecting upon her artistic journey during her visit to Peddie, Sutton said, “This work started almost 20 years ago in the form of film.” Currently, Sutton is an assistant professor of Art at Ithaca College.

Sutton portrayed her fascination with the parallel paradigm shifts created by globalism and the Internet through her work. She was originally from the central Appalachian Mountain region of Pennsylvania. Seeing the abandonment of the industries that once supported the area was a great source of inspiration for the artist. Sutton incorporated a common industrial backdrop into her paintings, as well as the portrayal of industrial buildings and structures in ruins or states of destruction. By doing so, Sutton effectively represented the economic transition from local to global, as well as from manual to virtual.

Sutton’s work consists of three-dimensional collages made of overlaid, chopped-up, ripped and folded fragments of printed images that depict multiple genres, ranging from vintage to current advertisements, and from post industrial landscapes to scientific illustrations. She also includes objects that she finds, such as architectural models, clothing, rusting metals, organic matter, minerals and sculpture, arranged over multiple layers of two-dimensional planes of plexiglass and viewed from above like an analog version of a Photoshop image.

The paintings displayed in The Swig Arts Center are small-scale and monochrome. When asked about the size of her work, Sutton pointed out that the size of her paintings are absolutely part of the content. “I like to think of them as spaces… Hybrid spaces influenced by the fact that we are on our phones all day. The importance of screens in our life has a lot to do with the scale [of her work],” said Sutton. Not only is scale a figurative representation of the size of today’s digital screens, but it also creates more intimacy between the artist and the art work. “It sucks you right into the work and makes you engage with it in a really mental way,” said Sutton. She was constantly pushing herself to go even smaller, asking internal questions such as, “how small is too small?” and “How small before it is completely a gray blob, or I go blind?”

When it comes to the choice of color, Sutton presented some colorful work from about five years ago and explained why it did not work in the same way as her monochromatic pieces. Though they involved the same content and narrative, Sutton did not want beauty to be the first interface. “It’s too easy. Beauty is very surface-level, and it is hard to get to critical thinking when anything is too beautiful. Anything bright pops out, and it is easier to see shapes, get to the naming place and relate them verbally with real-life objects.” By creating paintings that are concentrated with content, yet small and colorless, Sutton intended to confuse the viewer to an extent. “Putting lots of things in one painting creates a critically engaged, more suspicious viewer rather than a passive one. It’s more complicated. It trains your eye to see differently,” said Sutton. As art teacher Andrew Harrison hypothesized, Sutton was “trying to frustrate a quicker, easier read.”

“If you want to be an artist, you have to get used to being uncomfortable. But if there is one thing you shouldn’t be, it’s bored. Frustrated is better than bored,” Sutton said. When Moon asked Sutton for more words of advice for young artists, Sutton encouraged the artists at Peddie to embrace failure. “Whatever you feel doesn’t work often leads you to the next thing. You can’t learn anything unless you fail at it. In an art practice you have to have a sense of humor about that.” She further advised the young artists to accept critique and feedback, but also to make a wise judgment of how much advice they would adopt. As Sutton said, “Make a case, push it and make it your own. Always be in touch with what you think you are saying.”