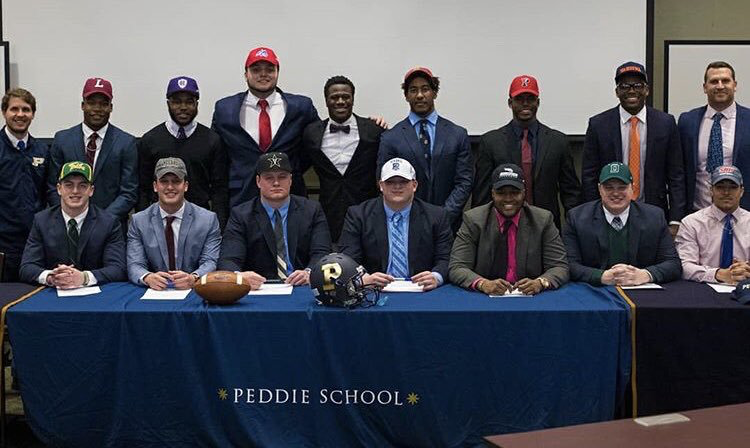 A record fourteen members of the Peddie football team signed letters of intent to play football in college. The signing took place on Feb. 7, among family, classmates, and teammates gathered in Efros Auditorium to witness the event.

Thirteen of the fourteen players signed to play at a Division one level this year. This number is far greater than that of the class of 2017, which had six players sign to play Division 1.

Senior captain Daniel Dawkins ‘18 committed to Vanderbilt. “Signing day was the most memorable moment of my career here at Peddie. It was great to watch all these guys that I developed with throughout the season sign and further their careers.”

Senior captain and William and Mary commit Tyler Tedeschi ’20 shared similar sentiments. “It was great to share this experience with the guys I’ve been competing with and with my family,” said Tedeschi.

Postgraduate Alex Schmidt committed to play defensive end at Dartmouth. “The guys on the team have been an integral part of my development as a person on and off of the field, and I’m really looking forward to chipping our way to a golf MAPL Championship,” said Schmidt

“It was great to work with Coach Malleo, Coach Parker, and Coach Tedeschi, and I cannot wait to continue playing with and against some of these guys in the future. I’m also excited to have a great time playing golf this spring with some of the guys from the football team,” said University of Rhode Island commit Evan Lovell ‘18.

Linebacker Javar Garrett, a three star athlete per 24/7 sports rankings, had seven Division 1 offers and will play at the University of Virginia next year. “I was grateful to share this experience with my brothers and I’m looking forward to seeing what they accomplish in the future,” said Garrett.

For the 2018-19 football season, Head Coach Chris Malleo will need to gain seventeen varsity players in order to fill the spots of the players graduating in May.