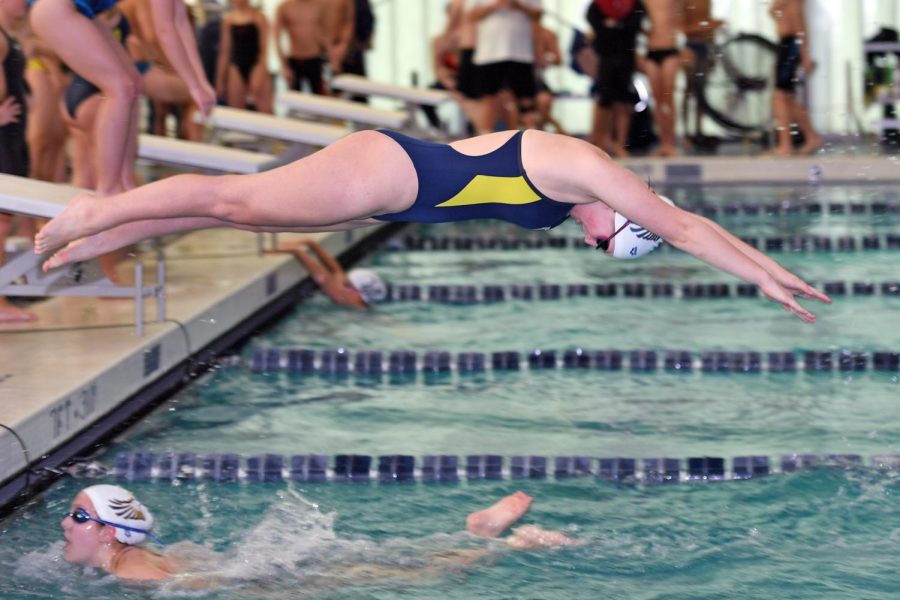 Peddies’ girls’ and boys’ swim teams began the winter season with their first dual meets against Christian Brothers Academy (CBA) and Trinity Hall, respectively, on Dec. 1.The girls’ team won against Trinity Hall by twenty points, while the boys’ team lost to CBA. “It was really exciting. It was my first high school swim meet and everyone was really hyped up. It was very fast pace but that made it more exciting, and fun!” said Audrey Weber ‘20, a new member of the team. “Watching the team come together and race for the first time was really awesome; my favorite part about this team is how well we are really able to step up,” said Lily Bradshaw ’20.

As for the boys team, “the first meet was a hard one,” said Rory Xu ’19 “CBA was as strong as we thought, and coming off of exams and Thanksgiving break, we weren’t in top notch shape. I’m proud to say that the boys put their best foot forward even when the chances of winning were next to nil. Each swam their best, and I think that’s what’s important at the end of the day.”

Among all the sports teams at Peddie, the swim team is known for its rigorous training and morning practices throughout the entire school year. “Fall training was a springboard for us to get into the motions of swimming again, and judging from personal performances as well as general performances at our recent dual meet, I think the practice positively impacted the team and really got the ball rolling into the winter season,” said Xu.

Xu believes that year-round training, especially for swimmers, is crucial to having a successful team because “if swimmers take an extended break, the muscles in our body aren’t being moved in the ways they are moved during swimming. Land sport athletes have the option to have an off-season because humans are running and walking every day, but you don’t see people floating around in the air swimming freestyle on your way to class.”

Everyone seems to agree that there is a great deal of promise for the team this year. “I say we have a lot of potential this year because we are a very young team, but it will require a lot of work, and some senior leadership over the next two months before our Easterns championship,” said head coach Greg Wriede ’95. “The girls seem to have found their stride and are taking big steps in practice and in the competition pool. I envision a strong performance in all of their meets over the season. The boys are strong too, but we cannot just brush past those who we used to crush this time. Every meet will be a battle, and with some swimmers out due to injury, every guy is going to have to put in everything he’s got,” added Xu.

Members of the team expressed optimism for the rest of the season, which will be  “Better, and better because I think these past couple of weeks haven’t been too intense especially coming off of our lon Thanksgiving break. [Afterwards] we went straight into a meet so I think the rest of the season we will be more prepared,” said Weber.  “A huge change in dynamic that I’ve seen this year was the support between teammates to train harder. Seniors are pushing freshmen to try harder in practice and truly unlock their potential, and both upperclassmen and underclassmen alike are holding each other accountable for attendance and effort in the pool. There is an energy in the pool that I’m really digging, and I hope this continues on for the rest of the season,” said Xu.