At a Conservative National Party meeting in Melbourne, 17-year-old Will Connolly cracked an egg on Australian Senator Fraser Anning’s skull. The Senator responded by punching the boy immediately.  Connolly had egged the Senator to protest Anning’s controversial remarks following the March 16 shooting that killed 50 people attending mosques in New Zealand. “The real cause of bloodshed on New Zealand streets today is the immigration program which allowed Muslim fanatics to migrate to New Zealand in the first place,” Anning said. The recording of the exchange went viral, leading many not only to criticize Anning’s reaction, but also to rethink their view of alternative forms of protest. Did Will Connolly commit an act of political violence, and if so, should it be condoned?

Within the Peddie community, varying opinions exist. Several students felt the senator’s comments warranted Connolly’s response, including Australian citizen Shabrina Supriyono ’20. “The Senator is extremely ignorant, and it is ridiculous how someone so close-minded and uneducated can hold so much power in the government,” Supriyono said.

“I think if he went up to the president and violently assaulted him, that would be bad. This is the best way of protesting I’ve seen,” remarks Jackson Cook ‘21. “Sometimes you just [have to] hit a guy in the head with an egg.”

Dishea Lightfoot ’20 said that the senator “probably deserved a little bit more than an egging” for his racist remarks.

Others not only praised the youth’s response as appropriate, but also pointed out the positive consequences of Connolly’s protest. “The incident brought attention to Islamophobic or anti-Islamic rhetoric. The Senator was essentially blaming the victims. If [Connolly] simply approached the Senator and said, ‘yeah this is bad,’ it would not have prompted nearly as much publicity as the egg. It was technically freedom of expression and a way for [Fannolly] to say, ‘I don’t align with your views.’ It was taking action,”Ethan Madden ’21 said.

Yet others disagree, if not with Connolly’s sentiment, at least with his methods. “When it comes to political arguments and controversy, there are ways to get around things without violence and peacefully protest. It is not right [to protest violently] and no human should be treated that way,” Caroline Coudert-Morris ’20 said.

Bateman Solms ’20 said “I feel like it is bad because you shouldn’t physically protest because there are better ways. However, I also feel like [Will Connolly] made a necessary point.”

Many others find the situation simply entertaining and wonder how security did not notice the egg. “The incident is hilarious because nobody got hurt,” Finn Stanley ‘21 said. “Anyone can get over getting hit in the head with an egg.”

The incident also prompted the creation of quite a few internet memes,which have also gone viral. 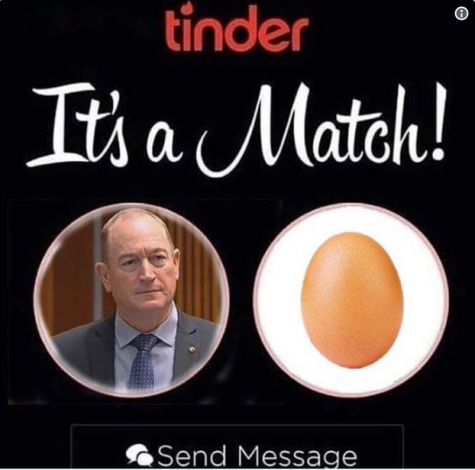