The Lion King on Broadway 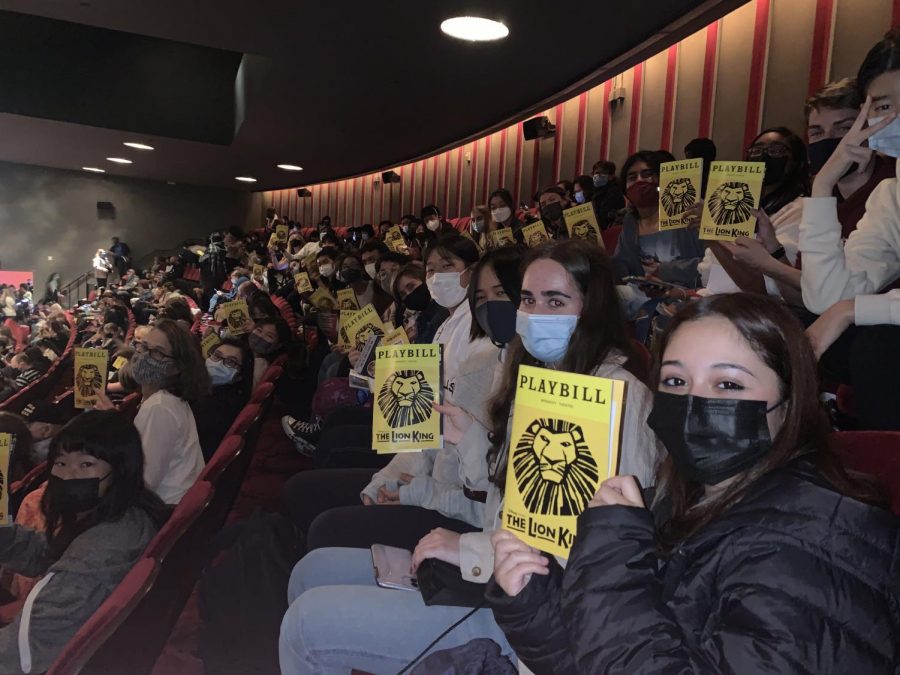 On October 17, Peddie students took a trip to New York’s Minskoff Theatre to attend a showing of “The Lion King” on Broadway. Based on the 1994 Disney feature film, the story of “The Lion King,” which revolves around the young and adventurous Simba’s journey to become the king of the Pride Lands, is one so incredibly engrossed in American iconography. But for those who were lucky enough to have their name drawn out of the hat in the lottery system of giving out tickets, viewing was made a little different due to the circumstances in which it followed.

In addition to the gradual slowing down of the COVID-19 pandemic, school policies like mask mandates and mandatory vaccinations, are allowing students to enjoy pre-pandemic activities such as the long-awaited Broadway trip.

Yang Wang ’24, a boarder and international student from Taipei, Taiwan, has attended multiple shows before. He said, “We had a pretty nice bus on the way there,” he continued, “and even though it was two and a half hours back and forth, it wasn’t that bad.” Being with his peers, he said, actually increased the enjoyment of the entire process for him. “It’s a bit better because you get to share your experiences with your friends, and, yeah, it’s just more entertaining.”

Once there, he described the process of walking to the mezzanine, the set of seats in the first balcony which traditionally overhang the first twelve rows of the orchestra seats and are typically for those who prefer an elevated position, as “pretty smooth … Mr. Michaels gave us our tickets based on how we sat on the bus … we got dropped off two blocks away from the theater entrance, and so we just walked as a group to the theater.”

On COVID, he assumes a very positive view of how it was handled.  In regards to COVID restrictions, he says, “at COVID’s peak, it would’ve been a lot worse, but nowadays, at least from my experience, besides wearing masks, the COVID restrictions were very light compared to last year.”

When asked his opinions on this, he said that he’s “perfectly fine with that — most people, at least in New York State, are vaccinated, so I’m not concerned with contracting COVID.” Peddie has made a positive effort to normalize the school year despite COVID shortcomings, safely bringing the long-awaited Broadway trips back for the community through the beloved musical “The Lion King.”