Math Teacher Imad Labban: A Day in the Life 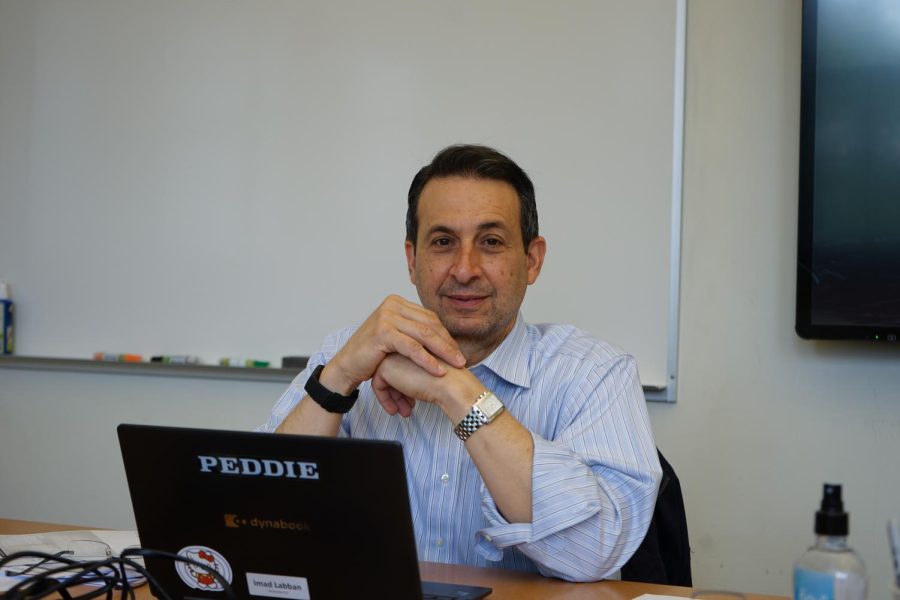 Mr. Labban, math teacher at Peddie, poses at his desk for a Peddie student photographer.

While most underclassmen at Peddie do not have a chance to interact with Mr. Imad Labban, upperclassmen enrolled in his AP Calculus class and economics electives love his teaching style and occasional stories from his past careers. 2022 marks Mr. Labban’s 10th year teaching at Peddie. Prior to his teaching career, Mr. Labban worked in the oil business as a mechanical engineer for five years. After receiving his MBA in finance, he then began a career on Wall Street, working at the Lehman Brothers. During the 2008 financial crisis, Lehman Brothers filed for bankruptcy (Fun fact: if you google “Lehman battle-ax,” the first image that pops up is Mr. Labban walking out of Lehman with a battle-ax in his hand). Then around 2011-2012, Mr. Labban began his third career as a math teacher at The Peddie School.

Mr. Labban usually arrives at Peddie early in the morning to begin some prep work for his AP Calculus AB and economics and finance electives. Despite being very different classes, Mr. Labban reflects that he finds a great mixture amongst these courses. While AP Calculus requires teachers to follow a strict syllabus and outline, finance electives offer much more freedom and flexibility where Mr. Labban has the autonomy to explore and experiment with new content. An early riser, Mr. Labban tries to incorporate news he reads early in the morning before work into the materials he is teaching to create more interactive and relatable content.

After school, Mr. Labban stays in his classroom and is one of the last to leave the building. During this time, Mr. Labban reflects upon his day and tries to respond to the students’ reactions and needs to improve the curriculum. “Immediately after each class, I critique what worked and what didn’t work for each lesson and think of new ways to improve for the next day.” Mr. Labban keeps a daily journal for every one of his classes of specific agendas and content he goes through every day. These journals not only help him keep track of the teaching material but are also a valuable and helpful resource for students who may need a reminder of the course progress or to catch up on work if they were to miss school. The job as a teacher also allows Mr. Labban has time outside of class which he spends on physical activities, such as working out in the gym and going on bike rides and spending time with his family. Mr. Labban has three boys who attended Peddie and notes that Peddie has a long-lasting impact on his children, even years after they have graduated.

When asked about his experiences at Peddie, Mr. Labban responded that when he first began to teach, “I knew I would like it. I didn’t know I would love it.” One of the most enjoyable parts of his career is having conversations with his students. Because of the courses he teaches, Mr. Labban mostly interacts with upperclassmen who often have conversations with him about colleges and careers. He enjoys listening to the students’ perspectives which lets him understand how younger people are experiencing education and visualize things happening around the world. “The company of younger people keeps my brain younger and keeps me engaged with the current world. The energy I get from students is unique as kids are inquisitive and curious and have a totally different world view,” he said.

Compared to his previous jobs, Mr. Labban explained that he was always frustrated for the wrong reasons at his old jobs. Here at Peddie, certain frustrations come from the right standpoint when he sees that the content is not reaching the students or when students are not reaching their full potential. As a response to such frustrations, Mr. Labban is always willing to try new methods to best approach individual students. He also noted that Peddie as a community is extremely supportive. While he did not pursue a professional career as a teacher as other teachers may have, he was able to learn a lot of things from fellow teachers. “Here, I feel like a sponge when I’m always absorbing more information and learning new things,” he said.

To students who have not yet taken Mr. Labban’s classes, finance and economics are great electives that have useful applications in real life. And for those who currently have Mr. Labban as their teacher, do not be afraid to reach out to him and engage in conversations outside of the classroom.