Director of Financial Aid Peter Park ’07: A Day in the Life 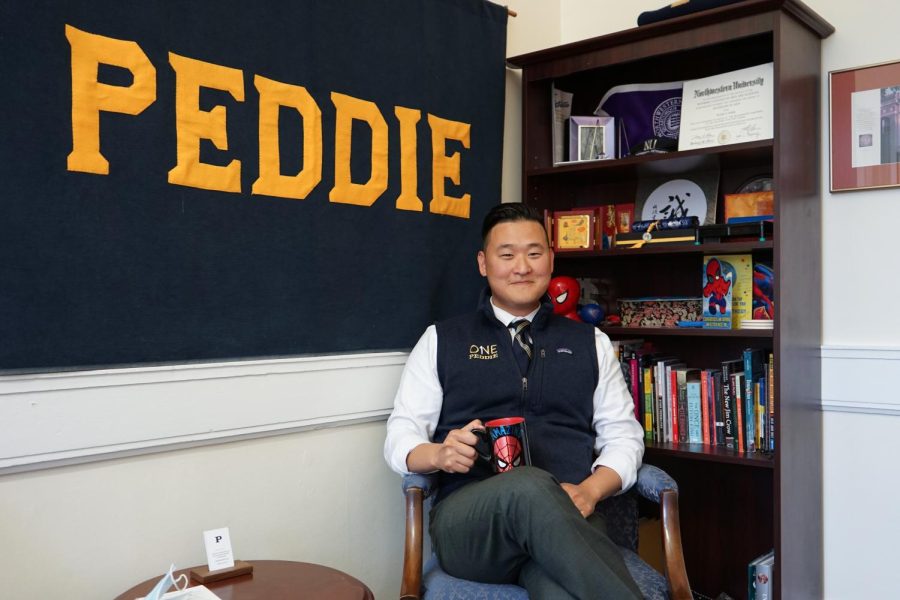 Tuition, often discussed solely by parents, plays a crucial role in deciding which private school to attend. Peddie’s financial aid program is designed to aid families to support their children after considering their own resources. One person working behind the scenes to assist people with paying their tuition is the director of financial aid, Peter Park ’07.

After graduating from Northwestern University, Mr. Park was thrilled to return to his alma mater in 2013 as a staff member, noting that “it was a very easy task to return to the place called home.” As the financial aid director, he gives his all to lighten the burden on the students and their parents. As someone who had directly benefited from Peddie’s financial aid, Mr. Park dedicated himself to granting equal opportunities to all accepted Falcons despite their economic background, emphasizing that “…it is critical to have an equitable approach when considering financial aid applications.”

While working in the admission office, Mr. Park acknowledges that many people helped bring Peddie to where it is today. He especially appreciates the gift that Walter Annenberg ’27 gave to Peddie, saying “I know I wouldn’t have been able to walk through these doors had it not been for the Annenbergs’ gift.” By honoring Annenberg’s actions, Mr. Park can help “[make] an accessible and affordable Peddie experience.” Not only is he grateful for Annenberg’s philanthropic actions, he is also thankful for his teammates, many of whom are Peddie alumni and parents, and know a lot about Peddie’s application process and experience.

Mr. Park’s daily schedule varies each season, with many duties in the admission office and tasks associated with being Peddie’s financial aid director. In the fall, he helps interview applicants and travels around the world to meet prospective Falcons who are unable to visit Peddie’s campus. In the winter, when applications are due, he, along with the rest of the admission team, reads through thousands of applications to ultimately make some tough decisions. In the spring, Mr. Park helps welcome newly accepted students with Be a Falcon Day, and he travels again to visit the accepted students who cannot make it to Peddie. He also reviews financial aid applications and meets parents to help them make the decision of where to go. While reflecting on his role in the admissions process, he remarks that “there are many amazing students, and it’s a privilege to shape each class.”

Besides the critical work he does, Mr. Park also has many hobbies. He is a huge fan of Marvel, especially Spiderman, who shares a similar name, “Peter Parker.” Because of this, he receives a lot of Spiderman merchandise which he keeps in his office. He also loves to spend time with his wife and son, Grayson. Having also previously been a swimmer, he calls himself a “swammer.” Mr. Park is also proud of his history at Peddie, hanging his Peddie and university diplomas in his office, as well as many photos and relics from his family and friends.

Mr. Park is very passionate and dedicated to his work, which is essential to the success of many Peddie students. With his help, many families are able to afford a Peddie education, and more students have the opportunity to attend this high school.